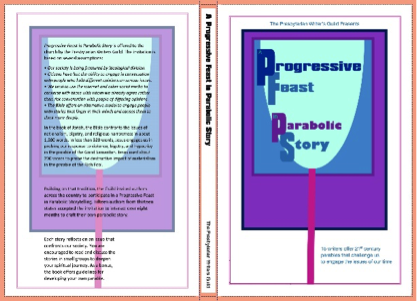 The Presbyterian Writers Guild announces the publication of its second collection of short stories by Presbyterian writers. Titled A Progressive Feast in Parabolic Story, the book is available from Amazon in both print and electronic versions.

The book contains “contemporary parables” by 15 writers from 13 states who followed a multi-phase process to develop their stories. Over a period of about nine months, participants in the project gave and received feedback from each other as they worked on theme, setting, plot, character development, and other aspects of their short stories.

The Bible takes on the whole issue of nationalism, bigotry, and religious narrowness in around 1,500 words in the book of Jonah. Jesus used fictional tales (parables) to challenge people to probe their understanding of faith. In less than 320 words, Jesus engaged his listeners in probing our response to violence, bigotry, and hypocrisy in the parable of the good Samaritan. The value of parables is that they linger with you even after you have left the conversation.

The Guild offered a challenge to writers across the country to develop contemporary parables that would enrich our dialogue around significant issues such as peacemaking, church controversy, God’s call in a contentious society, and racial and sexual diversity. Contemporary parables can promote discussions that offer an alternative to the divisive debates that often occur around such issues.

Here’s how you can make the most of these stories:

Reflect deeply on the issues addressed, and allow the Spirit to inspire you to new understandings.

Invite a church school class or some friends to read and discuss these stories together as a part of deepening your journey of faith.

Share with your presbytery (perhaps in an article in the presbytery newsletter) how you have used these stories for healthy conversation.

Share your reviews on Amazon and comments on Facebook and other social media in support of healthy conversation in the greater church.

As a bonus, the book contains guidelines for how those who engage in discussing these stories might develop their own contemporary parables that assist the church in exploring other issues. In the words of the hymn, “We’ve a Story to Tell to the Nations.” A Progressive Feast in Parabolic Story offers a model for creative storytelling. 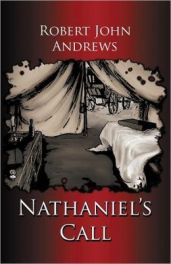 The Presbyterian Writers Guild has selected Robert John Andrews, a pastor in Danville, Pennsylvania, to receive this year’s Presbyterian Publishing Corporation (PPC) First Book Award for his novel set during the Civil War, Nathaniel’s Call. The award honors the best first book by a Presbyterian author published during the calendar years of 2012–2013.

Andrews’ book, self-published in 2012, was selected from among 17 entries in a variety of genres to receive the biennial award. The PPC First Book Award winner is recognized at the Presbyterian Writers Guild’s General Assembly luncheon, which this year will be Thursday, June 19, in Detroit.

Announcing the award, Jane Hines of Nashville, retired director of communications for the Synod of Living Waters and chair of the PPC First Book Award Committee, said, “Several genres are represented in the 17 books we received (teen science fiction, memoirs, poetry, young adult fiction, novels, journals, dissertation re-writes). We were just looking for the best writing in any category and found it in Nathaniel’s Call.”

Andrews’ novel is told from the point of view of a Presbyterian chaplain and a physician attached to a Pennsylvania regiment during the Civil War. “From the first page to the last page,” Hines said, “we were captivated by the vivid descriptions, the characterizations, the historical research, the love stories, the flow of words.

“As a Nashville-based committee comprised of Southerners,” Hines added, “we don’t think it will be a best-seller in Vicksburg and Richmond, but we see Nathaniel’s Call as a splendid example of the art of writing.”

Andrews has been the pastor of Grove Presbyterian Church in Danville since 1989. He has theology degrees from Princeton and Pittsburgh Theological Seminaries and was ordained in 1978. He and his wife, Elaine, have three children. He has been moderator of Northumberland Presbytery and writes a weekly column for the Danville News.

All those who entered the First Book Award competition will be given a chance to stand and be recognized at the Presbyterian Writers Guild luncheon at General Assembly. Those who entered, and especially those who placed in the competition, are encouraged to bring a copy of their book to the luncheon.